Following the catastrophic accident at the Chornobyl Nuclear Power Plant in 1986, the collapse of the Soviet Union in 1990 opened the gate for Western countries to support Ukraine in improving safety within its nuclear industry.

The European Union’s engagement with Ukraine began in 1991, with the establishment of a financing instrument for ‘Technical Assistance to the Commonwealth of Independent States’ (TACIS).

In the field of Nuclear Safety, the TACIS Instrument was superseded in January 2007 by the Instrument for Nuclear Safety Cooperation (INSC). The INSC Programme which was available to support nuclear safety improvement to all third countries with nuclear generation, was implemented in two phases:

In 2021, the EU established a new programme to support third countries in establishing improved nuclear safety. The new instrument is called the European Instrument for International Nuclear Safety Cooperation (EI-INSC)

The European Union’s continued support to the nuclear sector of Ukraine is of vital importance for the country and its European neigh bours. That support draws from European expertise in the promotion of an effective nuclear safety culture, with focus on:

This specific focus has facilitated significant improvement related to nuclear and radiation safety, within Ukraine’s nuclear sector, which is aligned with best intentional practice.

In addition to the financial instruments of TACIS and INSC, EU support to nuclear safety in Ukraine, has included substantial contributions to the European Bank of Reconstruction and Development (EBRD) managed ‘Nuclear safety Account’ (NSA) and ‘Chornobyl Shelter Fund’ (CSF). The EU financial contribution to the CSF, is equivalent to just under 30% of the total cost of €1.5Bn. Formal handover of the New Safe Confinement to Ukraine was made on the 10th of July 2019.

EU contributions to the NSA, which exceed €50M, have supported the construction of facilities designed to facilitate the longer-term decommissioning programme for Chornobyl NPP Units 1, 2 & 3.

Considering the political unrest that started in November 2013 and continued through 2014 in most regions of Ukraine, and the eight years of continued unrest in the east of the country, EU support to Ukraine has been one of the cornerstones to the country’s security and longer-term stability. The provision of support to the Ukraine’s nuclear sector, via the INSC programme, has been an essential element of that support.

The unprovoked invasion of Ukraine by the Russian Federation on the 24th of February 2022, demonstrates the necessity to continue the provision of international support to Ukraine.

EC Technical Assistance to the Commonwealth of Independent States – TACIS

Pursuant to the European Council in Dublin and in Rome in 1990, the Community introduced a technical assistance programme in favour of economic reform and recovery in the former Union of Soviet Socialist Republics. 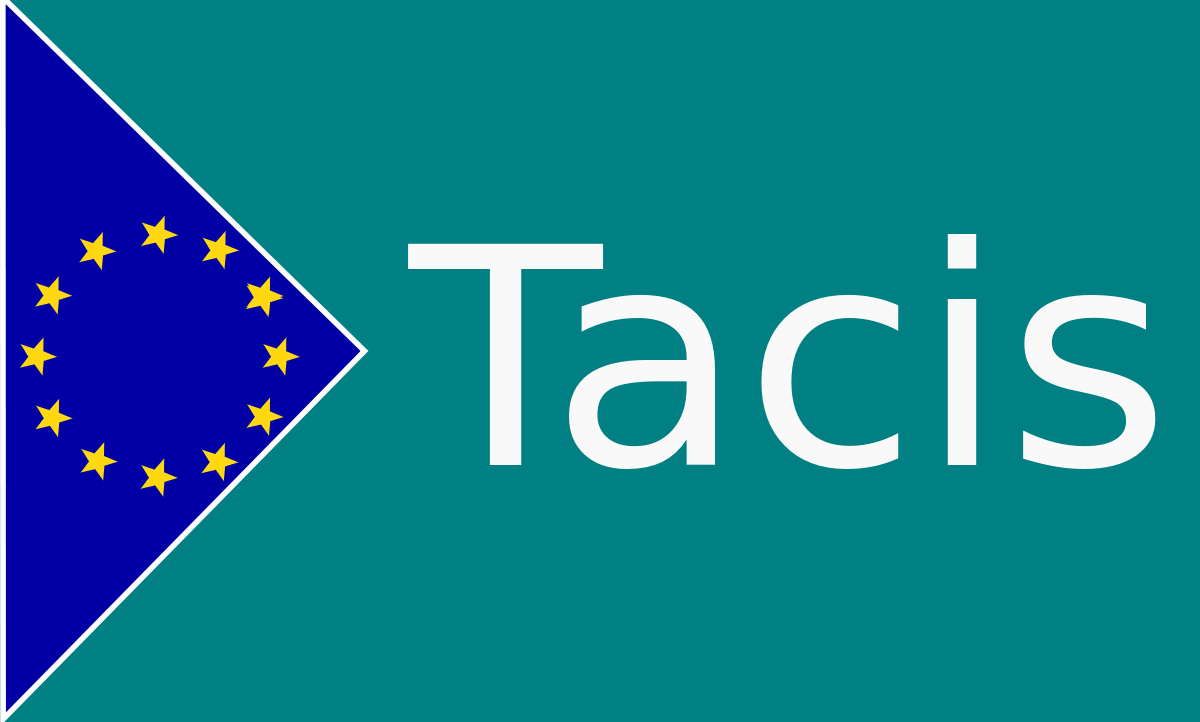 The aim of TACIS was to transfer know-how through technical assistance, including undertaking studies, preparation of plans, and giving advice and training. Consultants from the EU countries worked with the beneficiaries with the aim of transferring know-how and skills, which were intended to be replicated by other projects and organisations in the recipient country. The aid was financed through payments from the Community budget being made directly to the European contractors providing the technical assistance.

In the area of nuclear safety, the programme focused on three priorities:

Therefore, the provision of EU support in the field of nuclear safety in Ukraine, between 1991 and 2006, focused on, but was not limited to, the following key areas:

Through the TACIS Programme, the EU delivered more than 475 nuclear safety improvement projects, with a financial contribution of more than four hundred million Euro in Ukraine.

In January 2007 TACIS was replaced by the Instrument for Nuclear Safety Cooperation (INSC).

TACIS was replaced in 2007 by the Instrument for Nuclear Safety Cooperation (INSC). Phase 1 of INSC was in operation from January 2007 until the end of December 2013, and focused on:

The European Commission’s support in Ukraine under INSC, focused on the implementation of projects with ‘soft’ deliverables (i.e., fewer projects necessitating supply of equipment). Within the Operator Sector for example, cooperation has been related to the implementation of projects to support safety culture improvement, emergency preparedness, the introduction of best international practice in NPP maintenance, as well as modern approaches to the safe management and operation of NPPs.

A key cornerstone project related to the improvement of safety culture, was the joint EU/Ukraine project to establish a ‘National Maintenance and Management Training Centre’ for NNEGC Energoatom. The project, which commenced in 2009, saw the EU funded elements completed in 2012, with full operation of the Energoatom constructed training centre being achieved in 2018. The training centre features the only full scope simulator of VVER 1000 nuclear reactor in the world.

Given the positive results of the joint EC/IAEA/Ukrainian nuclear safety review, which were published in 2010, together with the vastly improved financial stability of Ukraine’s Nuclear Operator, direct support to nuclear Operator via the INSC Programme was phased out after 2012. However, NNEGC Energoatom continues to benefit from its strategic partnership with the EU, through a six hundred million Euro Euratom/EBRD loan, which has supported the implementation of the Company’s ‘Comprehensive Safety Upgrade Programme’.

Together with the Ministry of Environmental Protection and Natural Resources of Ukraine and the State Agency of Ukraine for Exclusion Zone Management, NNEGC Energoatom continues its association with the EU nuclear safety programme through the Task Force for the definition of the EU funded programme of nuclear safety cooperation.

INSC has promoted high standards of nuclear safety amongst nuclear regulators in non-EU countries, radiation protection and the application of efficient and effective safeguards for nuclear materials. Focus has been on providing support to build and further develop nuclear and radiation safety capacities, to enable the involved countries to achieve their nuclear energy strategies in accordance with best international safe practice.

Special attention is paid to safeguards as the proliferation of uncontrolled nuclear material poses a major security risk should it fall into the hands of terrorists. Additionally, in Ukraine, in support of mitigating the effects of the 1986 Chornobyl accident, several initiatives to improve the health and environmental situation of the population in and around the Chornobyl Exclusion Zone have been implemented.

While the EU recognises that the use of nuclear power is a sovereign decision, it is in the EU’s best interest that nuclear installations are operated safely, and that nuclear materials are properly accounted for. The EU views the establishment of a robust and solid nuclear framework as a global priority. This is to be achieved through effective cooperation aimed at preventing accidents and establishing consensus on the highest safety standards. The INSC Programme directly responds to the need for EU action in the field of nuclear safety by pursuing these goals. 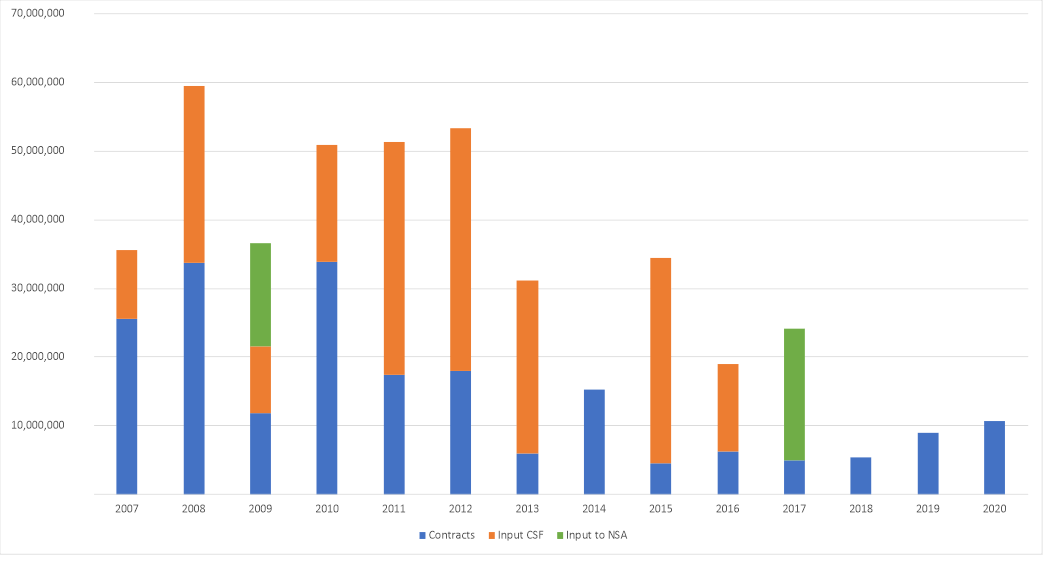 Evolution of the INSC budget allocated to Ukraine in the AAPs 2007 – 2020 (figures in MEuro). CSF – Chornobyl Shelter Fund and NSA – Nuclear Safety Account.

During this first phase, the Instrument covered more than 20 partner countries worldwide and had a budget of EUR 525 million, i.e., around EUR 75 million per year.

The Fukushima Daiichi accident of March 2011, along with the legacy of Chornobyl, highlight the ongoing global importance of nuclear and radiation safety and confirmed the need to continue efforts to support further improvements and to meet the highest standards at the global level. Both accidents clearly demonstrated that the health, social, environmental, and economic consequences of a nuclear accident may extend well beyond national borders and, potentially, worldwide.

Following the Fukushima Daiichi accident, the EU initiated comprehensive risk and safety assessments of operating nuclear power plants within the EU and its neighbouring countries.

In line with the provisions of the Council Regulation (EURATOM) No 237/2014 of 13.12.2013, Cooperation under the Phase 2 of the INSC pursues the following specific objectives:

In June 2018, the European Commission published a proposal for a Council Regulation establishing a European Instrument for International Nuclear Safety Cooperation (EI-INSC), which shall complement the Neighbourhood, Development, and International Cooperation Instrument based on the Euratom Treaty (COM (2018)462. The new instrument replaced INSC in 2021 and will be in place until 2027.

EI-INSC replaced INSC and will be in operation until December 2027, with a total budget of €300 M.

As with its predecessor, the geographic scope of the EI-INSC is worldwide. Thus, the Commission consider further contributions to the Nuclear Sector of Ukraine via the new instrument.

It must be recognised that prior to 2022, many strategic improvements related to the development of a strong and safe RAW management in Ukraine have been achieved through SAUEZM implementing the results of numerous past TACIS and INSC Projects. It is anticipated that these strategic improvements will be further enhanced, through the results of two INSC Projects related to the establishment of a programme and project management infrastructure across SAUEZM, together with the introduction of an enhanced nuclear safety culture aligned with modern management practices. The results of these two projects will also support improved implementation of future EU Funded Projects and coordination with Ukraine’s own funding instruments.

Over the past eight years, Ukraine has faced many difficulties, the most recent and most extreme being the unprovoked invasion by the Russian Federation in February 2022.

Although the many nuclear and radiological facilities within the Chornobyl Exclusion Zone were not impacted to any great extent, occupation of the Zone by forces of the Russian Federation in February and March 2022, resulted in more than €100 M worth of infrastructure damage. It is anticipated that Russia’s temporary occupation of Europe’s largest nuclear power plant, Zaporizhzhia NPP, and their destruction of hospitals and industry will require currently inestimable support in radiological clean-up. The European Commission is working alongside other international donors, to support Ukraine in ensuring nuclear and radiation safety is maintained and where needed improved. Whilst the estimated collective required funding is enormous, EI-INSC will make a significant contribution toward the recovery programme.

The main goal for EI-INSC is to achieve a significant and sustainable improvement of nuclear and radiation safety and a visible improvement in the country’s nuclear safety culture.

Priorities of the European Instrument for International Nuclear Safety Cooperation in Ukraine are:

Delegation of the European Union to Ukraine

Secretariat of the Cabinet of Ministers of Ukraine

Ministry of Energy of Ukraine

Ministry of Environmental Protection and Natural Resources of Ukraine

Ministry of Economy of Ukraine

State Agency of Ukraine for the Management of Exclusion Zone (SAUEZM)

JSO, Office 420, 49a Volodymyrska str., 01001 Kyiv, Ukraine
Enconet Consulting Ges.m.b.H., Kolingasse 12/7, A-1090 Vienna, Austria
Disclaimer: website contents are the sole responsibility of ENCO and do not necessarily reflect the views of the European Commission
Copyright © 2005-2022. All rights reserved